Analysis of videos of dog training sessions show that getting the dog’s attention and good timing of rewards are linked to better results. 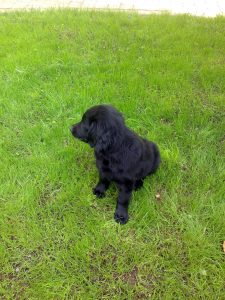 A new study looks at the interactions between people and dogs whilst teaching ‘lie down’. The results show the importance of the timing of rewards and of getting the dog’s attention in order to be successful in dog training.

The study is part of a wider research project at the University of Sydney into what they call “dogmanship.” I asked first author Dr. Elyssa Payne (University of Sydney) what this means.
“The formal definition for dogmanship is an individual’s ability to interact with dogs,” she told me in an email. “So, someone with good dogmanship is more likely to get the best out of that dog (which could manifest in good obedience performance, working success or just a good companion relationship).”
The study analysed 43 videos of dogs being trained to lie down that the researchers found on Youtube. The scientists used sequence analysis, which looks at the sequential order of events (i.e. the person does X, then the dog does Y, then the person does Z…). They also used lag sequential analysis to see what happens after a lag of 1 second, 2 seconds and 3 seconds (e.g. person does X, 1s later dog is doing Y…).

Dr. Elyssa Payne told me,
“The key results of our DogTube paper were that certain human behaviours (in this case looking at the dog and non-speech vocalisations such as kissing noises) are more likely to attract dog attention while dog attention was more likely to wane immediately after a food reward. So, dog trainers should be mindful of their animal’s attention and time food rewards according to training goals.
“Our analysis also highlights the usefulness of attention gaining mechanisms that are more unique to training sessions (e.g. kissing noises, whistles or tongue clicking), although these are time sensitive (dog is likely to respond within 1 second).”
After a food reward was given, dogs stopped looking at their owner. The researchers suggest several possible reasons, including the dog directing their attention to the food, preferring to look away from people whilst in possession of food, or because they were sniffing the ground (perhaps checking for any dropped food).

The two human behaviours of bending over and of both hands touching the dog tended to result in the dog pawing at them or making a noise (barking and whining were both included in this category).

People responded to the dog’s behaviour too. They seemed to notice when their dog was looking away from them and responded by looking at the dog; they also noticed lip licks as this was another time when they tended to look at the dog.

Looking at the dog and making non-speech noises (such as the aforementioned kissy sound) usually resulted in getting the dog to look at the person.

The person’s body position was important for the dog’s behaviour at all of the time lags. If the person was bent over, kneeling or crouched down, the dog was likely to be lying down 1 second, 2 seconds and/or 3 seconds later.

However, when the dog was only partially lying down (i.e. the chest was not on the floor or they were in a play bow position instead), the human was typically bent over only at 2 seconds before hand, or crouching or kneeling at 3 seconds beforehand (but not 1 or 2 seconds before). I think this suggests the person has not held their position long enough. (In the early stages of teaching a dog to lie down, when using a lure or a large hand signal, you may have to hold in position for a little while and wait for the dog to lie down).

Most of the people in the videos used food rewards, and 143 rewards were given in total across all of the videos, with 42 instances of a clicker being used. Other methods people used included tightening the leash, leash corrections, and pushing the dog.

Of course, Youtube videos may not be representative of dog trainers in general, and information about the trainers and dogs (such as prior training experience) is lacking. The videos seem to cover a range of training methods and abilities which is nice. We can’t infer a causal relationship from the results. The study takes advantage of an easily-available source of data, and the videos are likely more naturalistic than if people had gone into the lab to train in front of the researchers.

Although it’s no surprise that human behaviour affects dogs, the specifics of the results are useful. And there’s an important implication. The scientists write that “This information has implications for dog-human interactions in an obedience setting but also underlines the possibility that dogs that are perceived as difficult to train may be in the hands of people who lack the timing and awareness that characterize good dogmanship.”

The good news is that your timing, body position, and attention-getting are all things you can improve if you want to.

You might like my user-friendly guide to positive reinforcement in dog training, and my list of research studies on dog training (which includes links to places you can read about them). And if you want to work on your dog training skills in a class setting, see how to choose a dog trainer.